Depending on Hours of Service regulations, maybe - or maybe not - that was within the limit?

Or, maybe a second driver relieved the first half way?

Or, could this be the future? < joking.

mariomike said:
There may be a few glitches to work out. 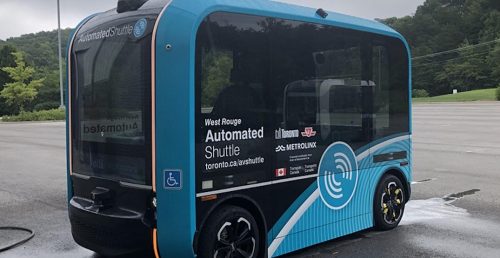 Toronto has suspended its trial of a self-driving bus after a similar one crashed into a tree, critically injuring the onboard attendant.

This shuttle runs (ran) right in front of our warehouse. I'll be curious to find out if the driver had it under manual control. Once or twice I've seen it and by the way it was moving suspected that the attendant was driving rather than the AI.

That being said, in the slightly snowy drive in to work on the 401 today my "smart" cruise control lost sight of the vehicle in front of me and started accelerating toward it. Lane correction is also glitchy in bad weather, construction zones and even when seeing cracks that have been repaired on the asphalt.

I think it will be some time before unattended vehicles are in general use on our roads other than on specific, controlled routes.
B

YZT580 said:
Interesting thoughts but it won't work. Although it is probably technologically achievable I can't think of an insurance company around that would be willing to provide insurance to an unmanned fleet so a driver will still be required. If the driver is in the seat but not driving I would bet that he won't finish even the first trip before his mind and his eyes are elsewhere. There will be an incident and it will be an expensive one. the one thing humans don't do well is monitor. If you have to pay for the driver anyway there is no advantage in paying for the extra computers, sensors etc. required to produce a self-driven transport. Now having a partial system where the computer operated the throttle and was capable of overriding an error, much as the airbus system attempts to prevent some pilot error might improve truck safety but it won't save the owners any money.
Click to expand...

Insurance companies will insure anything if it can be made profitable. They’ll need good data first, but once it exists they’ll price it in and go for it. Might be that we’ll see automated trucks do the technologically easier driving over long distance between major logistical hubs, with humans taking shorter distance local stuff.
Y

why not do away with pilots? automated flight has been a fact of life for several decades yet there are still two sitting in the front end. There are far fewer potential glitches with aircraft than transports

YZT580 said:
why not do away with pilots? automated flight has been a fact of life for several decades yet there are still two sitting in the front end. There are far fewer potential glitches with aircraft than transports
Click to expand...

Pilots are only really there for takeoff and landing.

Autopilot does a lot of the work as it is, and with AI I'm pretty sure the could handle most atmospheric events between point A and point B.

Same as AI trucking, the long hauls between cities will be where we will see it first, with random occurrences than in the city.

Will be interesting to see what truckers out of work move on to.

Brad Sallows said:
Will be interesting to see what truckers out of work move on to.
Click to expand...

My money would be on "the streets".
You must log in or register to reply here.

Digital government: how are we doing?

Army battalion in Adelaide being investigated for 'unacceptable behaviour'